Why do we continue to eat and drink out of plastic containers, when we have known for 80 years that plastics have hormonal effects in the body? Even health-conscious people often drink their two liters of water per day from a plastic bottle. 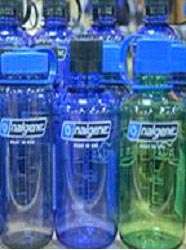 Some wildly popular water bottles are made of polycarbonate.

Recent news articles have pointed out public health concerns regarding exposure to a known estrogen-mimicking plastic called bisphenol A, or BPA. In fact, in April 2008, the Canadian Government took strong measures to prevent exposure of infants and the environment to BPA.

While Bisphenol A was first synthesized in 1891, the first evidence of its estrogenicity came from experiments in the 1930’s feeding BPA to ovariectomised rats (Dodds and Lawson 1936, 1938). Another compound invented during that era, diethylstilbestrol, turned out to be more powerful as an estrogen, so bisphenol A was shelved… until polymer chemists discovered that it could be polymerized to form polycarbonate plastic. Unfortunately, the ester bond that links BPA monomers to one another to form a polymer is not stable and hence the polymer decays with time, releasing BPA into materials with which it comes into contact, for example food or water.

Bisphenol A migrates into foods and liquids most readily at high temperatures; so keep plastic containers at room temperature or colder. Most plastics also migrate more readily under acidic conditions; so never use plastic to store acidic foods or drinks (soft drinks, coffee, citrus of any kind, vinegar-containing foods, tomatoes, pickles, etc.) All plastics are subject to degradation in the presence of oils and fats; so never use plastic to store fatty foods or drinks (milk, salad dressing, meats, oils, nut butters, shortening, etc.) Plastics degrade with time and become less stable, so throw away your water bottles and plastic food containers after six months. Of course, that just moves the problem out of your kitchen and into the landfill — best to not buy plastic containers in the first place!

If you focus on attaining vibrant, whole-body health, then excess pounds just melt away with no particular effort. But if your body is burdened with imbalances (hormonal or digestive or neurotransmitter)
Read more

END_OF_DOCUMENT_TOKEN_TO_BE_REPLACED

Thank you for your persistent kindness in what often feels like a sea of unhappy, cranky medical providers…I want to say thank you for all the follow-up information you sent yesterday…I had no idea [sleep] apnea had an impact on blood viscosity.  With gratitude, EL, Lake Oswego

Thank you for your persistent kindness...
END_OF_DOCUMENT_TOKEN_TO_BE_REPLACED

Dear Dr. Deb, thank you so much, but I am the one who is blessed… you have helped me to begin to bloom with life again.  You have helped me to feel more like the person that I used to be, heard me when I said that I needed help, and are there for me each step of the way.  I know what you have gone through, that some days are better than others, yet, the care and compassion that you have for others who have been there, the strength that you show, make you the unique and very special person th… END_OF_DOCUMENT_TOKEN_TO_BE_REPLACED

Thank you so much...
END_OF_DOCUMENT_TOKEN_TO_BE_REPLACED

Hi Dr. McKay, I have attached the results of my US that you ordered. I am relieved that no full-blown cancer was found. Dr. McKay: 1 Western Medicine: 0 You were the only one who detected a nodule just by checking my neck! Neither my NP or Dr. T. did! See you in a couple of months,

Dearest Dr. McKay, How are you? I almost want to be sick so that I can talk to you .… Overall, I have no real complaints.… However, you know how I love to eat. It is amazing how much healthy food I have found that doesn’t bother me…. I just celebrated my 59th birthday and plan on getting myself heading back in the right direction again come Monday. I really have no idea how I can ever thank you enough for all you have done for me. I cringe at the thought of going to a regular doctor. For … END_OF_DOCUMENT_TOKEN_TO_BE_REPLACED

“BC” age 59, posted from Japan
END_OF_DOCUMENT_TOKEN_TO_BE_REPLACED

Now I Don’t Bonk I just want to thank you because in the four months I’ve been seeing you, I’ve gone from practically crawling through my days to how I am now, which is pretty darn good. My work is physically and emotionally demanding but now I don’t bonk in the afternoons. As a cancer survivor, other doctors were afraid to help me. I’m glad to be back.

You guys are the most efficient, well organized, professional and knowledgeable clinic I’ve ever been too and i am sooo glad I found you!!! Thank you for treating me with kindness and such great care I look forward to a long continued relationship to get my health back on track!

I Am So Glad I Found You!
END_OF_DOCUMENT_TOKEN_TO_BE_REPLACED

I am so thrilled to have found Dr. McKay! After several months and attempts to figure out why I wasn’t sleeping, had the chills, was unbelievably moody and anxious at times where it really wasn’t warranted, Dr. McKay nailed it. All I needed was one little progesterone pill – bioidentical of course. I feel grounded, sane, well-rested and ready to take on the new year! Dr. McKay was extremely thorough, uber knowledgeable and quite frankly sensibly scientific!
Thank you thank you! I’m going … END_OF_DOCUMENT_TOKEN_TO_BE_REPLACED

I am feeling soooo much better! Still a bit exhausted, but the pain of my tonsils, throat and sinus pain are gone! THANK YOU!!! Lots of love to your awesome, giving heart …

Here is my mom’s [information] for tomorrow’s appointment. Thank you so much for everything; she seems to be doing much better!

from Oklahoma (mom flew in from overseas to treat here)
END_OF_DOCUMENT_TOKEN_TO_BE_REPLACED

Dr. McKay is extremely knowledgeable and always looking to learn and research more. That’s what I really like about her – she’s not just passing along or dredging up old information. She’s active in always looking for the best way to approach treatment. She’s an excellent communicator, so I always understand the why behind the path we’ve chosen. My health is a real investment for me and I wouldn’t continue seeing Dr. McKay if I wasn’t seeing real results.

Dr. McKay has made a huge difference in my life. When I talked to the M.D. about what I was experiencing, I was basically told, “Too bad, can’t help you.” Dr. McKay listened intently and got me on the right path using a natural, holistic approach. My energy is back and I’m feeling great. Her treatment is always caring and thoughtful. She’s very passionate about helping people and it shows in the care she provides

From the start Dr. McKay felt right for me. Her philosophy on health care is in line with my own. She’s warm, sensitive, knowledgeable and very caring. She’s the first doctor I’ve seen who really gives of her time. I never feel rushed or forced into a particular path of treatment. I’ve noticed a dramatic change for the better in my overall health and love that we’re achieving that through natural means!

Dr. McKay takes her time and really listens to me so she can get a complete picture, so her diagnoses are right on. She’s worked wonders for me and made a tremendous difference in my life. I feel more energized, have lost weight and feel better than I have in a long time. And Dr. McKay always makes me feel comfortable because what I share with her doesn’t fall on deaf ears.

Is salt good for me or bad for me? What should I do about my cholesterol? Why do I have indigestion so often? Is it true what they tell us about avoiding fat all the time?
Read more